How do I find Whitby Jet? – A Jet Setters Guide

How do I find Whitby Jet? – A Jet Setters Guide

If you like nothing better than vast expanses of golden, life-guard patrolled beaches, jet collecting might not be for you. If, however you appreciate some of the finest geology that the British Isles has to offer, coupled with a potential sprained ankle, a million dogs, fancy coloured seaweeds and only your own thoughts for company perhaps you’ve discovered the perfect hobby.

Whitby jet has not been legally mined since the end of the C19th. But why? I hear you cry. Well, I shall cover the trials and tribulations of jet mining on another occasion but all you need to know for now is, to keep you within the confines of the law, that you may only collect sea-washed jet in the Whitby area.

Sea-washed jet, as the name suggests refers to jet which has washed in by the sea. This sounds like the most idyllic, ethical, morally acceptable, vegan-friendly form of gem collecting on the planet. And quite rightly so because, if we follow these rules then the Whitby jet industry is certainly the world’s most ethical gem industry.

Only one problem, sea-washed Whitby jet is RARE. Have you seen how many jet shops there are in Whitby??? Competition is fierce, we all have our favourite hidden locations (I favour just to the left of the largest whale-stone, 11.68m NNE of Kettleness Ness) but assuming that you’d really like to find one piece yourself, which you will undoubtedly, bring hot from the beach, straight to The Ebor Jetworks to have your own custom piece created (I jest not) then where perhaps should one look? On balance, I would suggest Runswick Bay.

Primarily, it is a reasonable safe jet collecting locality as there’s a good chance that if you do come a cropper on the slippery rocks, that someone will see you before you suffer a long and damp demise as the tide comes in over your immobile body.

Secondly, Runswick boasts a café (seasonal), toilets (take your own Izal, water, soap and paper towel), plus a phone box (I can’t confirm this claim).

Thirdly it is certainly one of the most picturesque villages on the North Yorkshire Coast. A myriad of tiny cottages cling desperately to the unstable Jurassic shales, separated by winding paths. Following a landslip in 1682 the whole village was rebuilt, but things seem to have been more settled since then, so I’m reasonably confident that the village is still there if you are planning to pay a visit soon.

There is something however that you need to know about Runswick. The cliff down to the village is very, very high and steep. There is a car park at the bottom of the cliff, but only those who have ever attended the Louboutin sale at Harrods can appreciate the competition for a parking spot down there.

Assuming you have risen with the lark and arrive at Runswick before dawn, you must mentally prepare yourself for the steepness of the road to the car park. A 1:2 I believe.  One of my earliest childhood memories is of my dear mother screaming to be let out of our Mark 1 Ford Escort at the top of the cliff than face certain death due to brake failure on the decent. 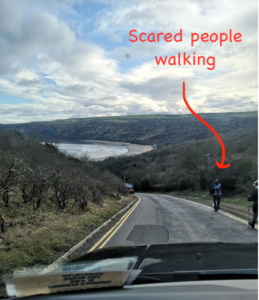 You can alternatively park in the adequate car park at the cliff top but bear in mind that you may require Sherpas to aid your accent after a day on the beach.

Assuming you are parked at the bottom, you may be feeling rather smug. This will soon fade however if you have not consulted the tides prior to your arrival. You see, the tide comes right in at Runswick.

It’s best to arrive 2 hours before low tide. This way you can follow the tide out and be first on the scene to collect all the jet. Also, the jet doesn’t wash in next to the car park. Oh, no sirree. You need to walk to the area designated on the photo below 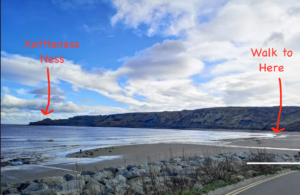 I should perhaps point out that it would be prudent to take suitable sturdy footwear and perhaps a gaberdine/southwester in case of a sea-threat blowing in.

I’d never advocate the wearing of a long faux-fur coat. It will get wet and you will get angry. 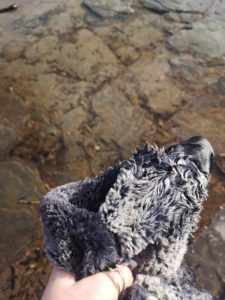 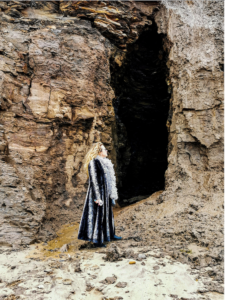 Jet collecting you see requires the participant to walk many miles bent double.

Once you make it past the beach huts and yacht club start looking for rotten sea-weed. Be prepared for the fact you may smell it before you see it. Whitby jet has a very similar specific gravity it seems to rotten sea-weed and therefore they do tend to wash in together. 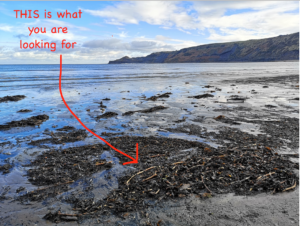 There are of course other nasty things that wash in with the tide. Perhaps you’d feel happier wearing Marigold gloves. At very least don’t rub your eyes, pick you nose or eat your sandwiches without using a hand sanitiser. Now, let’s cut to the chase, everything on the Whitby beaches is jet-black when it is wet. How, therefore will you decide what is jet, and what isn’t jet.

Here follows a guide to the most common errors encountered by the lay jet collector; 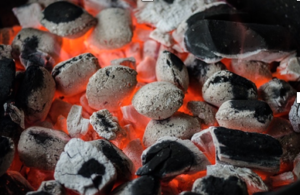 Almost everybody has attended a barbeque. In Whitby we have beach-barbeques. Some charcoal gets left on the beach and this washes around in the sea. Eventually, it is collected by keen amateurs and brought into our shops in bagful’s hoping against hope that it is jet. Jet doesn’t look like wet charcoal. Wet charcoal looks like wet charcoal. 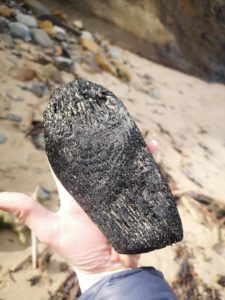 Whitby jet is fossilised wood, we all know this. However, burnt wet wood also looks very black and quite like wood. This is because it is burnt, black wood. This is not jet. Dig your nail into it. Is it soft? Then it is not jet. 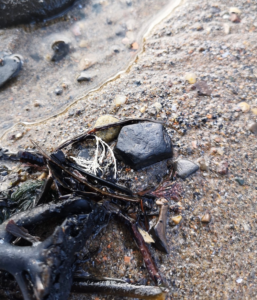 Sea-coal is real and it’s out there in huge quantities. Heavily weathered, rounded fuel-grade coals can look jet-like, especially when wet. When it dries, however, it is generally greyer in colour and as coal is not homogenous there are dull layers and sparkly layers. Jet is never sparkly and even when it is dry it is a uniform jet-black colour and smooth texture. 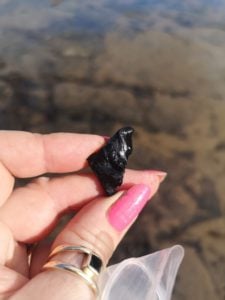 Tar looks identical to jet. This is because there are large amounts of bitumen in jet. Tar fools even the most hardened jet collector however, it is quickly identified if you pop it in your back pocket and use the seat-warmer in the car on the way home. Always best to check by digging a fingernail in prior to leaving the beach. 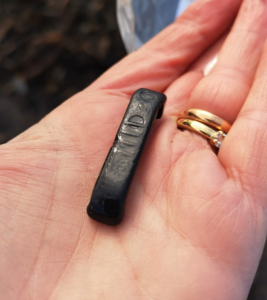 Black plastic is the same density as Whitby jet so a broken, sea-weathered piece can look jet-like. If you find it, please pick it up and dispose of it appropriately. 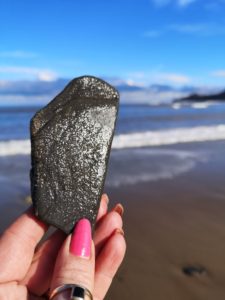 After sea-coal, the most common material that people bring to the shop thinking that it is jet is shale. The cliffs are made from black mudstones or shale is it is commonly called. When wet it is black but, when dry it is grey, dull and quite fragile. It is also heavy like all stones. I wouldn’t suggest carrying a bag of shale up the cliff. 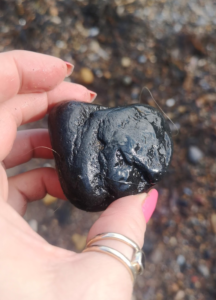 General black stones are abundant on the beach. Stones are heavy, cold and hurt if you drop them on your foot. They may even be round and black. Jet is not a stone, so it has none of these properties.

Finally, Whitby jet. Most pieces are tiny. The best quality pieces are usually pretty thin. The surface often shows a fossil bark texture which looks like parallel lines. It has a uniform smooth texture, is a uniform black colour (although shale may be attached to it which can look grey or rusty orange). The fracture is conchoidal like glass or toffee. 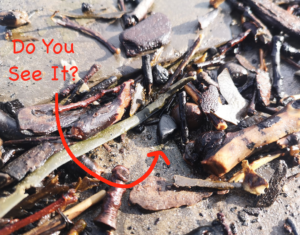 Expect pieces to be small, and don’t tell me if you find a big piece!

The secret weapon in the jet collector’s arsenal is wet n dry sandpaper. I recommend between a 800-1500 grit, the finer often the better. This will allow you to perform a streak test. Coal streaks black. Stone, shale and most plastic streaks white. Whitby jet in its best quality streaks cinnamon brown. Soft Whitby jet has a chocolate brown streak but beware some low-grade coals also have a dark brownish streak, especially at Bridlington or Cleethorpes. This is not Whitby jet, it is coal from Cleethorpes and that will be the subject of a future blog….